To Know More About Uttar Pradesh 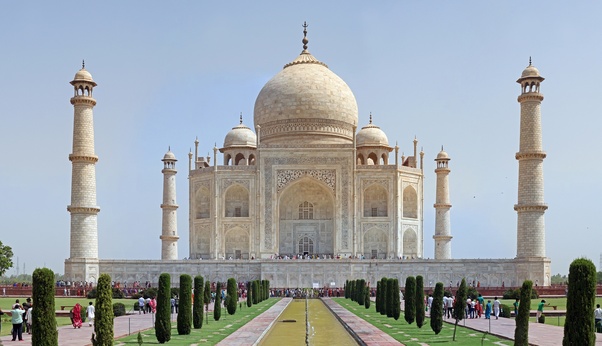 Uttar Pradesh is the rainbow land where the multi-hued Indian Culture has blossomed from times immemorial. Blessed with a varaity of  geographical land and many cultural diversities, Uttar Pradesh, has been the area of activity of historical heroes like - Rama, Krishna, Buddha, Mahavira, Ashoka, Harsha, Akbar and Mahatma Gandhi. Rich and tranquil expanses of meadows, perennial rivers, dense forestsand fertile soil of Uttar Pradesh have contributed numerous golden chapters to the annals of Indian History. Dotted with various holy shrines and piligrim places,full of joyous festivals, it plays an important role in the politics, education, culture, industry, agriculture and tourism of India.

Uttar Pradesh covers a large part of the highly fertile and densely populated upper Gangetic plain. Located in North India, it shares an international border with Nepal and is bounded by the Indian states of Uttarakhand, Himachal Pradesh, Haryana, Delhi, Rajasthan, Madhya Pradesh, Chhattisgarh, Jharkhand and Bihar. The administrative and legislative capital of Uttar Pradesh is Lucknow, and the financial and industrial capital is Kanpur. Garlanded by the Ganga and Yamuna. The two pious rivers of Indian mythology, Uttar Pradesh is surrounded by Bihar in the East, Madhya Pradesh in the South, Rajasthan, Delhi, Himachal Pradesh and Haryana in the west and Uttaranchal in the north and Nepal touch the northern borders of Uttar Pradesh, it assumes strategic importance for Indian defence. Its area of 2,36,286 sq kms. lies between latitude 24 deg to 31 deg and longitude 77 deg to 84 deg East. Area wise it is the fourth largest State of India. In sheer magnitude it is half of the area of France, three times of Portugal, four times of Ireland, seven times of Switzerland, ten times of Belgium and a little bigger than England 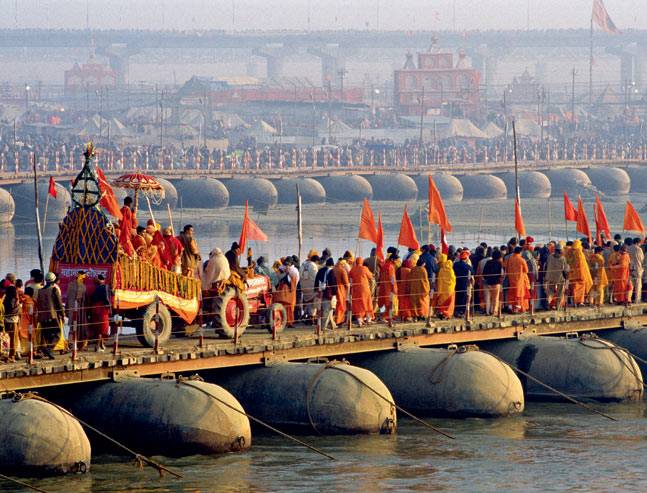 Uttar Pradesh attracts a large number of both national and international visitors. There are two regions in the state where a majority of the tourists go. These are the city of Agra and the holy cities: the cities of Varanasi, Ayodhya, Mathura, and Allahabad, by the sacred rivers — the Ganga and the Yamuna are all located in the state. The state hosts a Kumbha Mela every 12 years, where over 10 million Hindus congregate — the largest gathering of human beings in the world.

The Taj Mahal A vast number of tourists visit the Taj Mahal in Agra. Another important tourist attraction in Agra is the Agra Fort. Also famous is a 16th century capital city built by the Mughal emperor Akbar known as Fatehpur Sikri near Agra. Dayal Bagh is a temple built in modern times that many visit. It is still under construction, and would take an estimated one century for completion. The life-like carving in marble is not seen anywhere else in India.

Dudhwa National Park is one of the best Tiger reserves in the country. Lakhimpur Kheri is a must see location, and home to the Tiger reserve.

Millions of tourists and pilgrims visit the cities of Allahabad, Varanasi and Ayodhya, as those are considered to be the holiest cities in India. Every year thousands gather at Allahabad to take part in the festival on the banks of the Ganges, the Magh Mela. The same festival is organised in a larger scale every 12th year and attracts millions of people and is called the Kumbha Mela.

Varanasi is widely considered to be the second oldest city in the world after Jerusalem. It is famous for its ghats (steps along the river) which are populated year round with people who want to take a dip in the holy Ganges River.

About 13 km from Varanasi is the historically important town of Sarnath. Gautama Buddha gave his first sermon at Sarnath after his enlightenment and hence is an important pilgrimage site for the Buddhists. Also at Sarnath are the Ashoka Pillar and the Lion Capital, both important archaeological artifacts with national significance. Some areas require a special permit for non-Indians to visit. 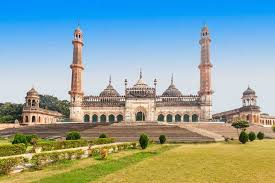 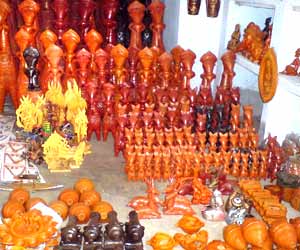 Uttar Pradesh is famous for its arts and crafts. Specific regions such as Varanasi for its saris and silk, Mirzapur and Bhadohi for its carpets, Agra and Kanpur for their leather craft, Moradabad for its metal ware, Lucknow for its cloth work and embroidery, and the entire state for its pottery are not only famous in India but around the world. 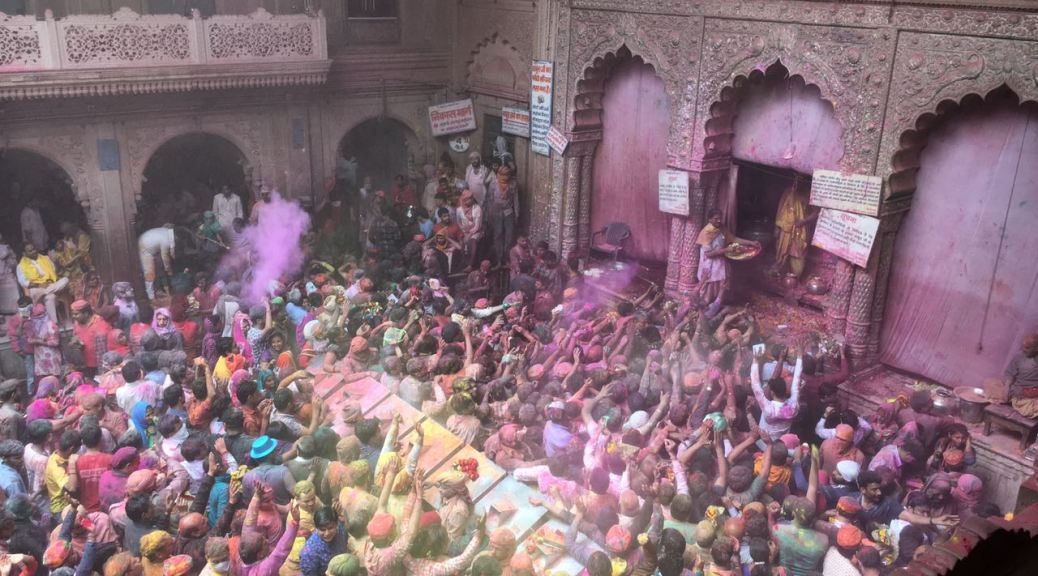 Festivals of almost all the religions are celebrated in U.P. The composite culture of the State is famous all over India. Various communities celebrate as many as 40 festivals with gaity and complete communal harmony. Sheetla Ashtami, Raksha Bandhan, Vaishakhi Purnima, Ganga Dashahara, Naag Panchami, Krishna Janmashtami, Ram Navami, Ganesha Chaturthi, Vijaya Dashmi, Deepawali, Kartik Purnima, Makar Sankranti, Vasant Panchami, Shivaratri and Holi are the main festivals of the Hindus. I'd, Moharram, Bakr-I'd, Barawafat and Shab-e-Barat are the major Muslim festivals. New Years Day, Good-Friday, Easter and Christmas are the prominent festivals of the Christians. Buddha Purnima for Buddhists, Mahavir Jayanti for Jains, the birthday of Guru Nanak, Martyr's day of Guru Teg Bahadur and Vaishakhi are the famous festivals of the people of Sikh faith. 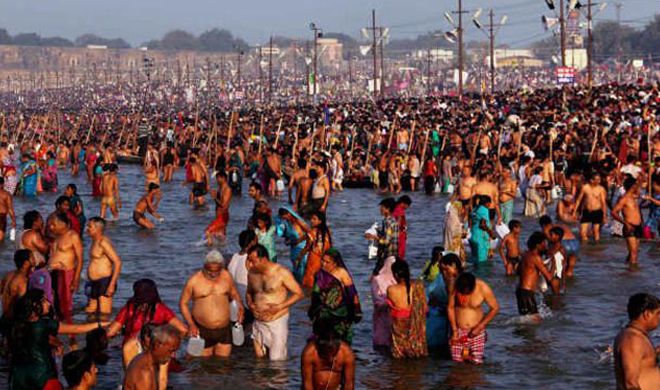 Kumbh Mela - At Haridwar
India has been attracting the whole world with her rich cultural heritages and spirituality. The renowned Kumbh Mela is a unique blend of all these. Haridwar Kumbh has its importance as the last Kumbh of this century.

"The Kumbh and the Ardh Kumbh" fairs are held periodically, every twelve and six years in Haridwar where a large number of pilgrims and devotees get together to,commemorate the churning of the ocean by the Devas (Gods) and Asuras (Demons) to obtain nector (Amrit).when the coveted Kumbh (jar) of nector was obtained one of the Devas stopped at four places viz. Haridwar, Prayag, Nasik and Ujjain before he finally arrived safely at heaven. A few drops of this nector is supposed to have spilled in the water in these four places. Sages, saints and pilgrims started periodically to flock to these Tirths to celebrate this divine event by taking dips in the holy rivers. It is an unique event that blends religious and social features of Indian society.

Stay Connected with our Offers!